Twitter is, depending on who you ask, the greatest invention, or the greatest timewaster of recent times. I certainly use it a lot, and it provides around 40% of the traffic to my blog, so evidently others do too. But, whenever I use it, I have a tendency to wonder: is this really a valuable use of time? Most of the time I use it, I am just timewasting. I might be putting off tidying stuff, study, or even activities I enjoy such as coding or blogging while on Twitter.

Of course, pre-Twitter the other two big timewasters were email and IM. I've never been a big user of email, and IM requires the other person to be on at the same time as you. In comparison, some of the people I follow on Twitter have a 12 hour time difference, meaning I'm never on at the same time as them. As well as that, because following people on Twitter isn't two ways, I can follow the famous people like @stephenfry, or even just relatively well known programmers like @codinghorror (Jeff Atwood) or @shanselman (Scott Hanselman).

But... 90% of famous people I follow on Twitter end up getting unfollowed within the next 2 weeks. Why? Because they tend to either end up doing one of the following. 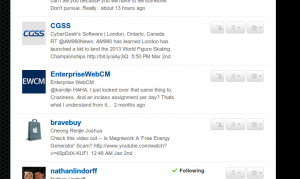 Yes, I'm sure that they really are interested in what I'm going to say, and the fact that all they have is ads for their products and 10k people they follow won't affect that. Really.

Another problem with Twitter is part of it's core functionality. Every tweet is limited to 140 characters. While it's partially one of twitter's strengths, it can cause significant problems. Some things just don't fit in 140 characters, as evidenced by the existence of sites such as Twitlonger. Others can be reduced to 140 characters, but end up losing all meaning, To quote one of my own tweets:

How many great possible blog posts, go out in a blaze of 140 chars, I wonder?

One of my biggest problems with this blog is thinking of things to write about. And lately, looking through some of my tweets, I wonder how many of them would have been better used by expanding them to a blog post, rather than reducing them to 140 characters. Others have evidently came to the same conclusion before I did, as you can see by the amount of tweets that are just links to blog posts, but then this has the flip side of reducing some Twitter accounts to being inferior RSS feeds (worse because decent RSS feeds include the content as well).

One of the big features of twitter is it's API, which is easily the best one out there. Before OAuth it took all of 5 minutes to code your own twitter client, using nothing more than the standard libraries included with your programming language. And it's led to many great clients like Twitteriffic on the iPhone/iPod Touch and TweetDeck on PC, both of which I use a lot. The problem with these is it makes it even easier to waste time on Twitter. 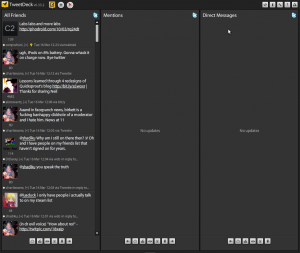 And, I do waste a lot of time on Twitter. When my timeline froze the other day, rendering Twitter unusable for me, I got nearly twice as much work done.

The final problem with Twitter is who to follow. This used to be much easier, as you could see @replies by people you follow to people you didn't. If people you follow tend to tweet at one person a lot, maybe they had similar interests. So you followed them. Now the closest we get is Retweets. Unless you want to manually look through all the following lists of the people you are following of course.

Now of course, it's not all bad, and if it was I'd have deleted my Twitter account already, but in the future, I will definitely be spending less time on Twitter, but if you'll excuse me, I'm off to tweet about this blog post.