If you've read my blog for a while, you may have noticed that I have mentioned OpenTTD a few times. It's one of my favorite games, and it's well worth playing. If you haven't played it, you can get it from the official website. It used to be a case that you needed a copy of the original TTD game to play it, but with OpenGFX, that is no longer true.

There is a tutorial for the game on the offical wiki to get you started. Once you've read through it and understood it, you are ready to play the game. After a while, you'll probably want a few, more in-depth tricks to the game. So here's a few basic ones:

If you want to learn how to play the game really well, I suggest you spectate or play a few games on #openttdcoop. They are very advanced, so if you don't understand what they are up to, don't worry. It is kind of a case of learning in the deep end there, but it does help a lot. While I'm still barely a newbie compared to what they build, most of my friends think I'm really good at the game. Don't ask me why. I certainly don't think so. The official wiki, and the openttdcoop wiki also provide a good few tips. 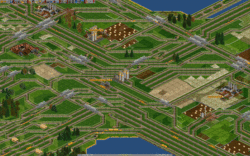 #openttdcoop built this. Insane, but mostly simple ideas scaled up.

The game has a multiplayer mode, (which is how #openttdcoop build such huge things), which can be played co-operatively or against each other. It's great for LAN games, provided you have a bit of time on your hands. For internet play, you can find loads of servers to play against other people. If you want to just play against your friends over the internet, without joining someone else's server, it can get a bit tricky since someone needs to host it, and firewalls and NATs and all the other issues you normally have do cause problems, because one of you need to host it. I managed to get around it by running it on my VPS a while back, but that's still kind of complicated. I may post a guide for how to do this in a few days.